Well… more like hatching week. As a first-time “chick hatcher”, I expected the chicks would start hatching on day 21. 5 days and 4 chicks later we learned 21 days is a rough estimate.

We currently have two incubators running with 24 eggs between them. Originally we were only supposed to have 12 eggs however they arrived late and we ended up with 24 hatching eggs. I did learn the eggs are “viable” up to 2 weeks from the day they are shipped. We will save that for another blog post. Big shout out to Meyer Hatchery for their superb customer service!

I woke up that morning wondering where the heck time had gone, the eggs would be hatching tomorrow! We gathered the brooder and set it up in our front dining room (aka the room that is used for everything but dining). With so much going on around the farm I hadn’t really had taken the time to sit down and read up on what to expect. That evening my mother asked me if there was a bubble on the egg so I went over to inspect. That was no bubble, it was a pip! Our first chick was making its grand entrance.

The process was incredible to watch. We were lucky enough to watch the first chick “pip” and “unzip”. It was fairly quick, about 3 hours from pip (breaking the surface of the eggshell) to unzip (the process of breaking free from the egg).

Funny enough, this chick came from the ONE egg I placed in the incubator from our flock so we are unsure of who the dad is (we have 3 roosters). So it’s 50% Easter Egger (a hen) and 50%: Barred Rock, Cream Legbar, or Mystery Rooster. I guess we will see as it grows!

The next chick pipped later that evening but we were pretty exhausted so we went to bed. The next morning there was a little striped Easter Egger chick (hatchery egg) enjoying morning coffee with us!

NOTHING. Absolutely no activity. I was pretty worried but was assuaged after doing some deep digging on forums and blogs. I’ll post the ones I found most helpful at the end of this post!

Houston, we have another pip! This time one of our Rhode Island Reds. This hatch took about 12 hours to complete. A lot longer than our first two and that is completely normal. The chick hatched the morning of the 23rd day.

Now I was a bit concerned with the other 9 eggs. So I removed them, placed them in a warmed towel and candled them to see what was going on inside. Unfortunately 5 of the 6 were not going to hatch but number 6 was chirping! 24 hours later and Rhode Island Red #2 was out! Hatching is no easy task. Each chick takes hours to dry and rest in the incubator before moving them to the brooder.

We are happy to report all four chicks are healthy and thriving! Now we know what to expect when round 2 starts this week!

Newsletter
Want to keep up to date with the latest farm news? Sign up now! 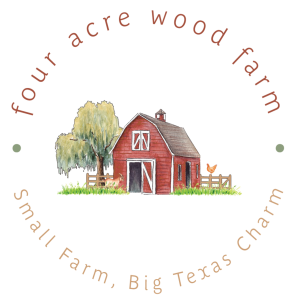 Four Acre Wood Farm is our family's journey into small-scale farming, ranching, and DIY home renovation based in Burleson, Texas.